Freetown, 9 June 2011 – Sierra Leone’s success in the field of records and archives management has aroused interest across the West African region. A delegation from Liberia’s Centre for National Documents and Records Management Agency (CNDRA) was in Freetown from 6-10 June to study Sierra Leone’s achievements in records management. The delegation, led by the Director-General, Philomena Bloh Sayeh, was privileged to learn from Sierra Leone’s Records Management Improvement Programme, which is a key component of the public sector reform agenda. 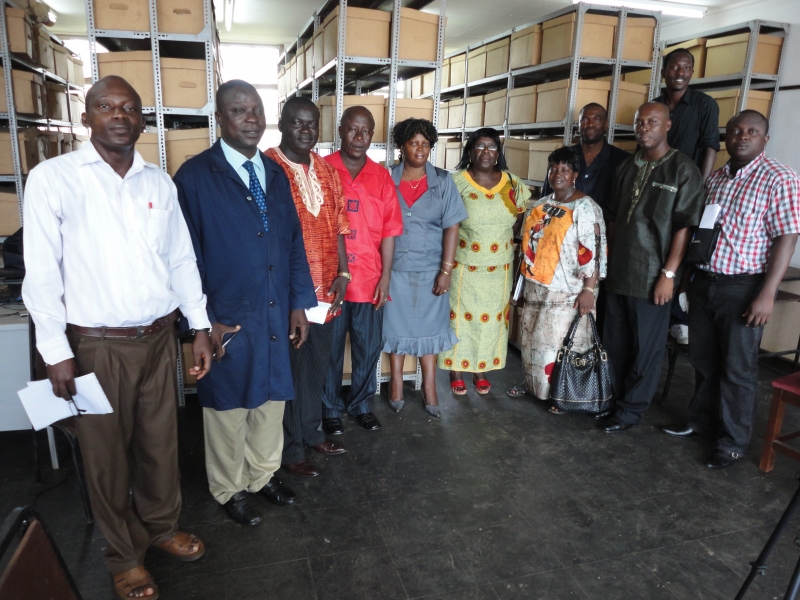 Liberian delegation at the National Archives at Fourah Bay College

Sierra Leone and Liberia have both faced enormous challenges in establishing control of Government records in the post conflict period. Before the Sierra Leone Records Management Improvement Programme began in 2005, there was a breakdown of records systems, which affected all areas of the public service. There were consistent reports of documents or whole files being stolen, files being hidden so that information could be sold, and records being used as wrapping paper in markets. Large quantities of closed files were kept in valuable office space.

In recent years, the Government of Sierra Leone has recognised the importance of well-managed records as evidence for all aspect of governance. It has made records management a cornerstone of the public sector reform programme and achieved real progress in building new records systems, particularly for the management of employment records and payroll control. The visit of the Liberian delegation has created an opportunity for Sierra Leone to share its knowledge and skills with its close neighbour. Hopefully, Sierra Leone and Liberia will continue to work together to share lessons learned.

The Sierra Leone Records Management Improvement Programme, coordinated by Public Sector Reform Unit, has been carried out in partnership with the Government of Sierra Leone and the International Records Management Trust, a non-profit organisation based in London, which has been working in the region for over 20 years to build records management capacity as a basis for protecting civil and human rights, reducing poverty, strengthening democracy, and promoting economic and social reform. Records management improvements in Sierra Leone have been funded with support from the Government of Sierra Leone, the United Kingdom Department for International Development, and the European Commission. Ongoing work on teachers’ records and payroll control is funded by the African Development Bank.

The delegation also visited the Ministries of Agriculture, Forestry and Food Security, Health and Sanitation, and Education, Science and Technology which were pilot MDAs for introducing systems and tools when the programme started. The team visited other institutions such as the Special Court of Sierra Leone, the Institute of Library, Information and Communication Studies of the University of Sierra Leone, the Conservation Unit of Fourah Bay College Library, and the National Archives and Records Centre facilities.